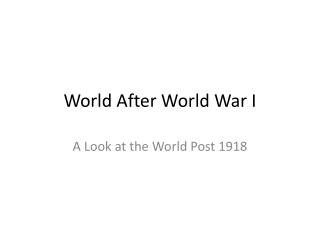 World After World War I World After World War I. A Look at the World Post 1918. What was the world like politically after WWI?. Colonies’ participated in the war, which increased demands for independence Mass amounts of colonial nationalism and resistance to imperial rule begins

World After World War I