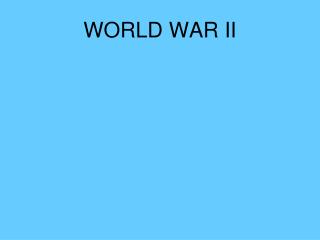 World War II - . the war. the war in europe. world war ii began with hitler’s invasion of poland in 1939, followed

World War II - . causes. depression: most of the world prior to wwii was not doing well financially fascist leaders power

World War II - . the road to war. i. germany hitler rises to power because of the harsh treatment of the treaty of

WORLD WAR ii - Mobilization/ early struggles. world war ii. roosevelt’s war message. what were some of the points that