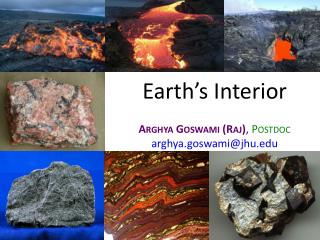 Earth ’ s Interior. Arghya Goswami (Raj) , Postdoc arghya.goswami@jhu.edu. Is Earth a Sphere?. The Earth is only approximately spherical, so no single value serves as its natural radius. Distances from points on the surface to the center range from 6,353 km to 6,384 km (3,947–3,968 miles).

The Layers of the Earth! - Earth layers the earth is divided into four main layers. *inner core *outer core *mantle