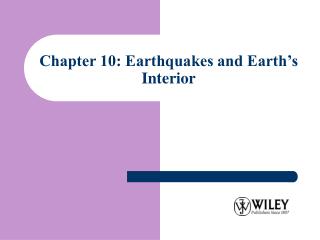 Chapter 5 Earthquakes - . earth science. forces in earth's crust. a force that acts on rock to change its shape or volume

Earth and its interior - . by: ross osborne. volcanoes/earthquakes. volcanoes are caused by convergent boundaries in the

Earthquakes and Seismotectonics Chapter 5 - . what creates earthquakes?. the term “earthquake” is ambiguous: applies

Chapter 10 Section 2 Locating and Measuring Earthquakes - . objectives: -explain how a seismograph is used to record