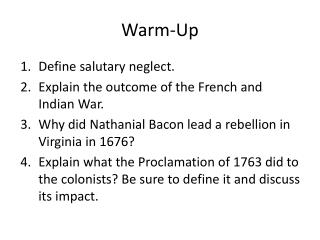 Warm-Up. Define salutary neglect. Explain the outcome of the French and Indian War. Why did Nathanial Bacon lead a rebellion in Virginia in 1676? Explain what the Proclamation of 1763 did to the colonists? Be sure to define it and discuss its impact. Causes of the Revolution.