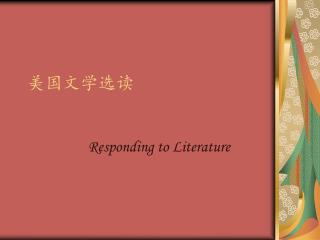 美国文学选读. Responding to Literature. Orientation . Questions for the two different groups in the class(compare the difference in the answers) 1. Why do you read literature? 2.Why do we read literature? RESPONDING TO GLOBAL CONFLICT - Stratofortress. responding to global conflict. b-17 flying fortress. b-24 liberator. b-29