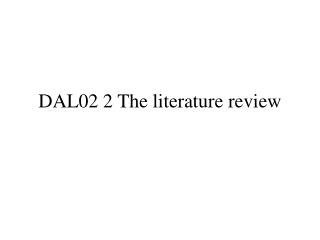 EMPIRICAL FORMULA - . the empirical formula represents the smallest ratio of atoms present in a compound. the molecular

Literature Review - . what is the literature review?. the ‘finished product’ i.e. chapter(s) in your dissertation

The Study of American Literature in China: American Content and Chinese Perspective - . 1, a brief introduction to the