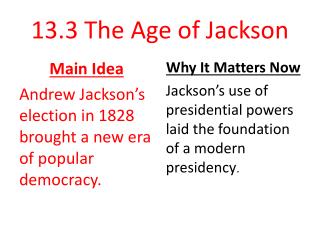 13.3 The Age of Jackson. Main Idea Andrew Jackson’s election in 1828 brought a new era of popular democracy. Why It Matters Now Jackson’s use of presidential powers laid the foundation of a modern presidency . CA Standards.

THE AGE OF ANDREW JACKSON - . a new era of politics &amp; change. the election of 1824. an increase in sectionalism