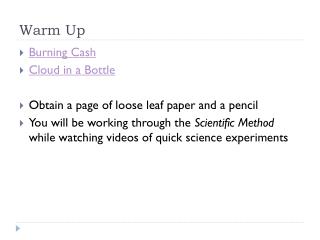 Warm Up. Burning Cash Cloud in a Bottle Obtain a page of loose leaf paper and a pencil You will be working through the Scientific Method while watching videos of quick science experiments. The Scientific Method. Unit 1: Section 1. Essential Questions.