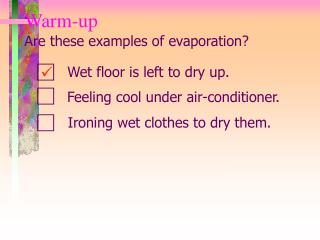 Warm-up. Wet floor is left to dry up. Feeling cool under air-conditioner. Ironing wet clothes to dry them. Are these examples of evaporation?. . Warm-up. Put it inside a room with all windows closed. It is muggy and is going to rain. Strong sunlight shines on it.