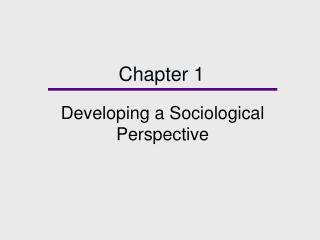 Chapter 1. Developing a Sociological Perspective. Chapter Outline. What is Sociology? The Sociological Imagination The Significance of Diversity The Development of Sociology Theoretical Frameworks in Sociology . What Is Sociology?. The study of human behavior in society.