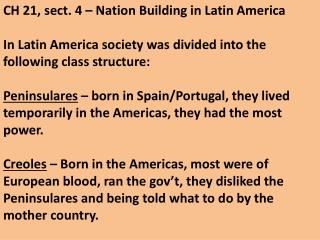 CH 21, sect. 4 – Nation Building in Latin America In Latin America society was divided into the following class structure: Peninsulares – born in Spain/Portugal, they lived temporarily in the Americas, they had the most power.

Chapter 21 The Age of Imperialism - . 1800 - 1914. key events. competition among european nations led to the partition of

Nation Building and Economic Transformation in the Americas, 1800-1890 - . chapter 23. independence in latin america.

The united states in latin america - . economic and social trends in 20 th century latin america, and the u.s. response.

Behind Latin Dance - . what we fail to see in dancing! by: maritza barron. introduction. background of dance mexican

The height of imperialism - . chapter 21. colonial rule in southeast asia. imperialism- extension of a nation’s power

The United States and Latin America - . the monroe doctrine. 1823 – president monroe warns european nations not to

Emergence of nation-states in Latin America 1800-1920 - . brainstorm. what was the situation like in south america prior