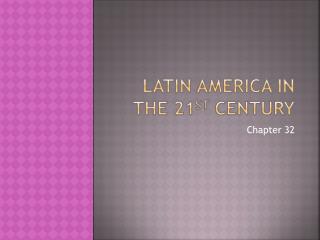 Latin America in the 21 st Century Latin America in the 21 st Century

LATIN AMERICA - . revolution &amp; reaction into the 21 st century. introduction. the arrest in 1998 in london of

The united states in latin america - . economic and social trends in 20 th century latin america, and the u.s. response.

OPPORTUNITIES FOR LATIN AMERICA? - . the war on terror. u.s.-imposed rules of the game co-existence with geo-economic

Latin America Revolution &amp; Reaction - . into the 21 st century. essential questions. how did the cold war and

Chapter 17 Latin America: Shaped by Its History - . what does mesoamerica mean? a term used to describe the culture of

The United States and Latin America - . the monroe doctrine. 1823 – president monroe warns european nations not to

Early Latin America - . before 1492. most areas were inhabited by non-sedentary and/or semi-sedentary people how many