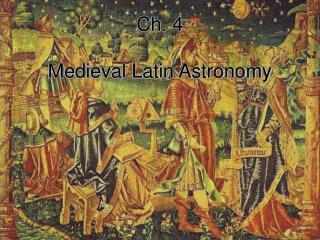 MEDIEVAL LATIN ASTRONOMY - . “middle ages” – time from the fall of rome in 476 until the fall of constantinople in

Ch.29--Astronomy - . the astronomical unit. a convenient unit of distance measurement within the solar system. miles /

Ch. 11 Medieval Africa - . the geography of africa. the continent of africa is divided into several distinct landform

Ch. 4 - . interactions among organisms. how does competition affect growth, survival and reproduction of organisms?. when

Ch 4 - Prokaryotic. ch 4. functional anatomy of bacteria and other microbes. eukaryotic. or the differences between

Ch. 4 - Ecosystems and energy. ch. 4. levels of biological organization. “eco-” = house the study of the interactions