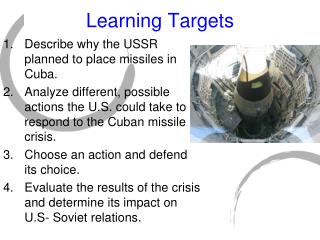 Learning Targets. Describe why the USSR planned to place missiles in Cuba. Analyze different, possible actions the U.S. could take to respond to the Cuban missile crisis. Choose an action and defend its choice. Clear Learning Targets - . how to deconstruct the standards! developed by regional teacher partners with the pimser p-12

Funds of Knowledge - . learning targets. i understand the relationship between motivation and engagement to teacher

Patrick An Introduction to Medicinal Chemistry 3/e Chapter 2 THE WHY &amp; THE WHEREFORE: DRUG TARGETS - . contents

Developing A Learning Environment - . how can the classroom be used to effectively support children’s learning?.