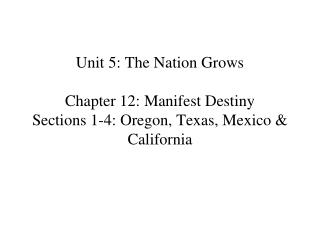 Manifest Destiny, Mexican-American War, and the Gold Rush (scooting ahead to the mid-1800s) - . manifest destiny. idea

Dignity and destiny in Him - . 1 jn 3:1-4. introduction. in the first two chapters the christian life has been presented

Destiny Song Presentation - . you will find a song that deals with destiny and create a power point to present this song

Chapter 17: Manifest destiny and its legacy - . ….and tyler too!. william henry harrison, the whig president elected in

HOOP DREAMS: Control Your Destiny - School days. school is important.everything you do in school counts!. stay in

Chapter 10 The Texas Revolution February-May 1836 - . essential questions did the change in the government of mexico