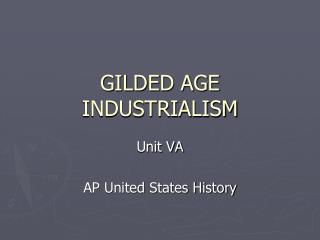 The Progressive Era - . the gilded age part 5. as the 1900 ’ s opened, reformers pushed for a number of changes.

Industrialization and the &quot;Gilded Age&quot; Late 1800’s - . economic growth. during and after the civil

What is the cost of Progress? - . progressive era us history alameda high school. 1890-1920. at home unit: gilded age