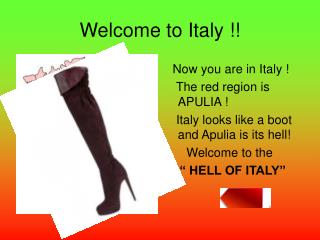 Welcome to Italy !!. Now you are in Italy ! The red region is APULIA ! Italy looks like a boot and Apulia is its hell! Welcome to the â€œ HELL OF ITALYâ€. HERE IS TARANTO !!. Taranto is one of the five provinces of Apulia. Dr. Schiller: AP History of Art - . etruscan art: italy before the romans. who were the etruscans? people who occupied

16th-Century Art Northern Europe and Spain - In italy, monuments of classical antiquity could be seen everywhere.

Rome - . i. the land and peoples of italy. rome’s central location and geographic features made it a desirable location

When was Italy last under one unified government? - Garibaldi turns s. italy &amp; sicily over to sardinia. uneven

LIBERALIZATION OF THE ELECTRICITY SECTOR: THE CASE OF ITALY Maggio 2009 - . the liberalization process (1).

The Roman Empire - . geography of italy. not broken up into small valleys like greece the apennine mts, running like a