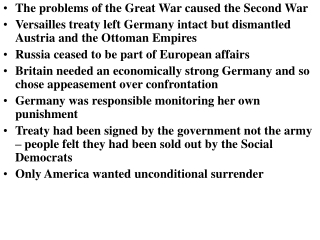 The problems of the Great War caused the Second War

The problems of the Great War caused the Second War

Owners Wanted - . ephesians 4:25. so then, get rid of lies. speak the truth to each other, because we are all members of

Wanted * President of U.S. - Wanted * president of u.s. must have the following credentials : natural born citizen 35

Chapter 11: The Americas on the eve of invasion - . ap world. toltecs : precursors to the aztecs. pre-columbian: before

Everything you ever wanted to know about a Codec - . but were afraid to ask????. it’s software. in simplest form, a

The Japanese Red Army - . the history of terrorism as a strategy of political insurgency april 2011. japan after world