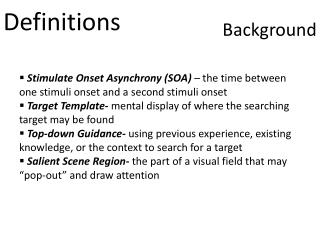 Stimulate Onset Asynchrony (SOA) – the time between one stimuli onset and a second stimuli onset Target Template- mental display of where the searching target may be found Top-down Guidance- using previous experience, existing knowledge, or the context to search for a target Ideology: definitions - Webster--3a “a systematic scheme or coordinated body of ideas or concepts esp. about human

Definitions - . propagule= structure used by an organism to spread or survive locus= a physical portion of a chromosome,a