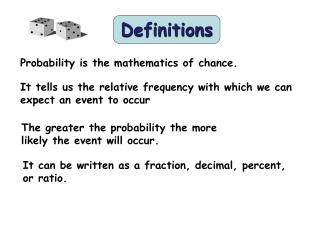 Definitions. Probability is the mathematics of chance. It tells us the relative frequency with which we can expect an event to occur. The greater the probability the more likely the event will occur. It can be written as a fraction, decimal, percent, or ratio. 1. Certain. .5. 50/50. 0.