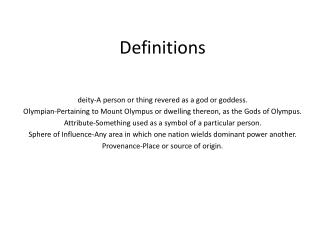 Definitions. deity-A person or thing revered as a god or goddess. Olympian-Pertaining to Mount Olympus or dwelling thereon, as the Gods of Olympus. Attribute-Something used as a symbol of a particular person. Sphere of Influence-Any area in which one nation wields dominant power another.