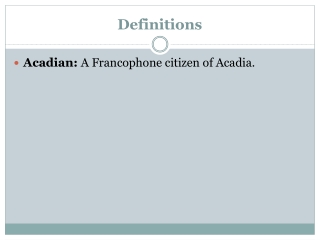 Definitions. Acadian: A Francophone citizen of Acadia. The Acadians. In the mid-1700s, the Acadians were the descendents of the French colonists who had farmed the shores of the Bay of Fundy. By 1710, most of Acadia was under British control.