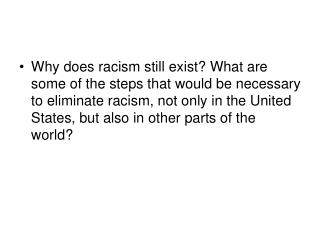 Why does racism still exist? What are some of the steps that would be necessary to eliminate racism, not only in the United States, but also in other parts of the world?. The Have and Have Nots of Healthcare - . economic segregation in healthcare the district of columbia example. gloria

Let’s Play! - . all of these topics will be on your test tomorrow, so pay attention!. meiosis: the steps. meiosis

Brown vs. The Board of Education - Return to aca return to portfolio toc (link will only work if in “view show” mode.

Chapter 8 - Patterns of Inheritance - . chapter 8 genetics and heredity. chapter outline. outline. i. the concept of a

Human Genetics - . understanding genetics with family trees. how do we use mendel’s observations about dominant and