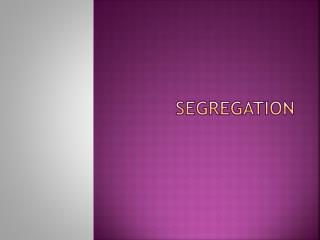 Segregation. Jim Crow Laws in the South. 1876-1965 AA kept as second class citizens Games for children were racist Segregation – Separation of AA in the community. Jim Crow laws in the north. It wasn’t as bad in the North, however, it was still hard for AA Preserve segregation!! - Did you see this morning’s paper? walter cocking, the head of the college of education at uga,