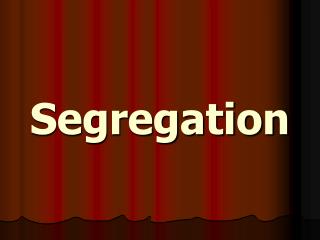 Segregation. Jim Crow Laws. Designed to keep blacks from exercising their rights under the 14 th and 15 th Amendments Literacy tests : had to prove you could read and comprehend in order to vote Poll taxes : had to pay a fee to vote Chapter 14 Audit of the Sales and Collection Cycle - . statement. presentation outline. accounts and documents in the