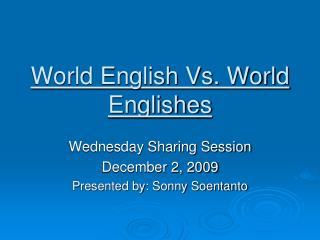 ENGLISH AROUND THE WORLD - Unit 2. english around the world. how much do you know about the english language?. read the

World Englishes Lesson 5 - . elf – english as a lingua franca. the spread of english as an international lingua

The Role of English in the World and in the University - . juliane house jhouse@uni-hamburg.de

World Englishes Jennifer Jenkins - . a resource book for students. b. development. implications and issues. b1: the

STATUS OF ENGLISH IN THE WORLD: TRIPARTITION - . the 3 circles of english. the us linguist braj kachru has suggested that