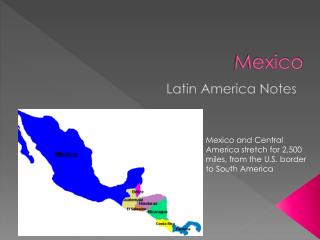 Mexico. Latin America Notes. Mexico and Central America stretch for 2,500 miles, from the U.S. border to South America. Geography of Mexico:. Mountains dominate most of Mexico. Sierra Madres run along both coasts of Mexico.