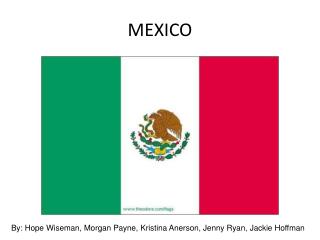 MEXICO. By: Hope Wiseman, Morgan Payne, Kristina Anerson, Jenny Ryan, Jackie Hoffman. Historical Backround. Occupied by Indians, such as the Mayans and Incans, until 1519 Conquered by Spain in 1519 Declared independence from Spain on September 16, 1810. Geography.