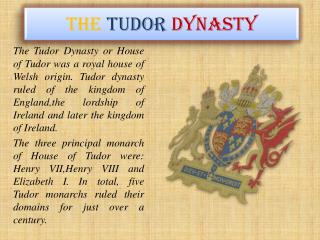 The Tudor Dynasty - . in brief. henry vii. seized the crown on 22 august 1485 defeated richard iii in the battle of

The Tudor Dynasty - . english reformation and religious upheaval. match the key word to the correct definition.

Tudor dynasty - . a renaissance family. the history. the  tudor dynasty  or  house of tudor  was a  royal house

The Tudor Monarchy - . conflicts over belief. the tudor rose. conflict between the houses of lancaster and york henry vii