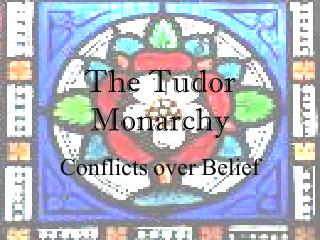 The Tudor Monarchy. Conflicts over Belief. The Tudor Rose. Conflict between the Houses of Lancaster and York Henry VII was part of the house of Lancaster Married Edward IV’s Daughter Elizabeth of York. Henry VII. Won his kingship from Richard III at the Battle of Bosworth Field. The Monarchy - . estra tõnisson estra@kivilinn.tartu.ee estra.pbworks.com. the royal coat of arms. the house of windsor.

The Hawaiian Monarchy - . “the last hawaiian queen”, lydia paki kamekeha lili’uokalani was on the throne during the

The French Monarchy - . chapter 19:iii. france was divided between catholic and huguenot-dominated areas by the

The Dual Monarchy - . o f austria-hungary. after 1848 the hapsburg empire was a problem both to itself and for the rest

Funding the Monarchy - . the civil list began in 1660 nearly 70% pays the queen’s staff pays for the queen’s official

The Papal Monarchy - . innocent iii, the fourth lateran council, and the fourth crusade. popes and kings. henry ii and

The British Monarchy - . monarchy of the united kingdom. there have been 12 monarchs of great britain and the united

The Tudor adventures - . welcome to the tudor adventure click here to start playing. challenge 1 it is the war of the