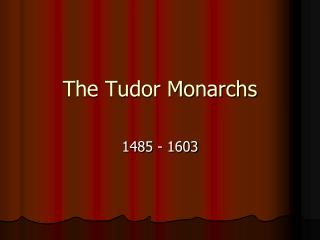 The Tudor Monarchs - . the tudors . the tudors reigned from 1485 until 1603. there were five tudor kings and queens:

The Tudor Monarchs by Carmine Congiu - . the tudors. there were six tudor kings and queens. the family came to power in

The New Monarchs - . objectives:. you will be able to identify how the new monarchs embodied the ideas of roman

The New Monarchs - . chapter 13 part 7. the new monarchs. many of basic institutions of the modern state were created

Monarchs - . chapter 14 section 2 in your notes. mary i. main focus throughout reign was to strengthen england’s

The Tudor Monarchy - . conflicts over belief. the tudor rose. conflict between the houses of lancaster and york henry vii

The Tudor adventures - . welcome to the tudor adventure click here to start playing. challenge 1 it is the war of the