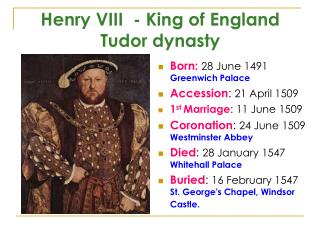 Henry VIII – James I Tudor England - . henry viii. born 28 june 1491 at the palace of placentia at greenwich. the third

Henry VIII Tudor - . jana stehl íková v7a. what will you see in the presentation? . i ntroduction y outh wives:

King Henry VIII - . fayadh kabir. contents. intro who? where ? what? when? why?. intro . my presentation is about henry

King Henry IV of England - . natalie alamo per. 3. about king henry the iv. king of england and lord of ireland reigned

The Court of King Henry VIII - . name. a henrytudor.co.uk production. throne. the kings throne. the queens

Tudor dynasty - . a renaissance family. the history. the  tudor dynasty  or  house of tudor  was a  royal house

Henry VIII and Tudor Times by Y5S - . my name is henry viii. i am tall, handsome and intelligent. i am good at reading,

HENRY VIII and THE CHURCH OF ENGLAND - . in 1534, henry viii wanted to divorce his first wife, catherine of aragon, so

Tudor England - . objective: students will be able to explain how the tudor royalty centralized power in the english