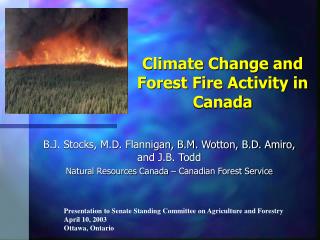 IS GLOBAL WARMING A THREAT? - . or is it just hot air? www.friendsofscience.org. global warming doom and gloom circa

Canadians and Wildland Fire: A Shared Risk - . a proposed comprehensive assessment of current and future options.

By: Bradley Barker - . mission statement. the canadian red cross mission is to improve the lives of vulnerable people by

A Forest Fire - . a science demonstration “likewise the tongue is a small part of the body, but it makes great boasts.

Forests of the World Part 2 of 2 - . biome 3: rainforest. tropical rainforests are found in asia, south america and many

Temperate Deciduous Forest - . by: rachel champney and michael peltz. location. primarily in eastern half of the united