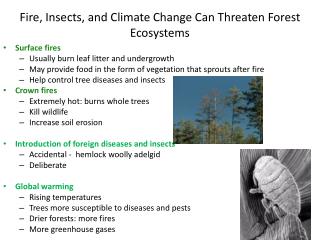 Effects of Climate Change on Forestry and Forest Ecosystems - . a presentation by aaron mamula for agec 695 2/22/05.

Climate change and ecosystems JOANNA WIBIG - . changes of timing of phenophases changes in ranges of species and biomes

Fire and Ecosystems - . by joe mraz. what are ecosystems?. ecosystems are all the cycles, organisms, and objects that

Forest ecosystems - . forests occupy approximately one-third of earth's land area, account for over two-thirds of the