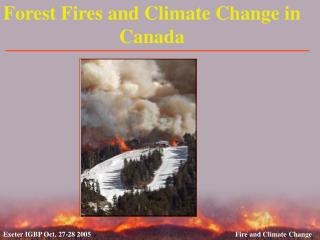 Basement Fires - . introduction. from a firefighting standpoint, basement/cellar fires are one of the most dangerous and

Climate Change Implications in BC - . assessing past, current and future fire occurrence and fire severity in bc.

Canadians and Wildland Fire: A Shared Risk - . a proposed comprehensive assessment of current and future options.