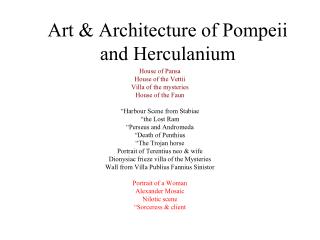 Art & Architecture of Pompeii and Herculanium Art & Architecture of Pompeii and Herculanium. House of Pansa House of the Vettii Villa of the mysteries House of the Faun “Harbour Scene from Stabiae “the Lost Ram “Perseus and Andromeda “Death of Penthius “The Trojan horse Portrait of Terentius neo & wife

Art & Architecture of Pompeii and Herculanium

DREAM A DREAM - . my dream holiday by jayne smith. where i want to go. italy england japan. why italy?. i’ve always

HSC EXAM –MAY 2013 - . cities of vesuvius—pompeii and herculaneum sources. plaster casts of bodies in the garden of

Palaestra - . pompeii , herculaneum and sport. pompeii. the pompeii palaestra was built during the augustan period. it

POMPEII QUEST - . i am the “spirit of

Pompeii, Italy - . marley henderson. map. photos. tools and techniques. some tools that the archaeologists use are:

Clothing in Pompeii - . taken from a lararium in pompeii, this segment of a wall painting shows both the tunica

The Eruption of Vesuvius - . www.misterconnor.org. catastrophe. the eruption of vesuvius started on the morning of 24