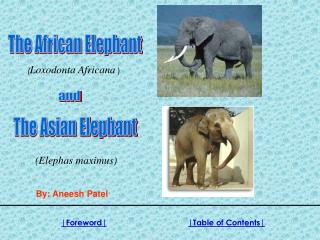 Embrace the Elephant - . a few provocative questions…. say ‘hello’ to the pachyderm. cimi is terribly (fatally?)

Elephant - . i hate poachers. lion. i’m the king here!. wolf. get out of the pack… you weren’t invited. dog. this

The Elephant Man - . christine sparks. the novel. history of the circus. the freak tent. sideshows in the circus. ( neu -

AFRICAN ELEPHANT - . african elephants are the largest land animal mammals in the world. colour: brownish-grey with

Mambo The Elephant! - . mambo was an elephant, a big elephant. he has a long trunk, two big ears, four strong legs, two

PRESENTATION ON THE NATURAL HISTORY OF THE AFRICAN ELEPHANT - . classification of african elephant. kingdom : animalia

African Elephant - . i would like to introduce the . by: amy cunningham.

Bagging the Elephant - . the process of finding hard-working elephants (business leaders) and selling them on working