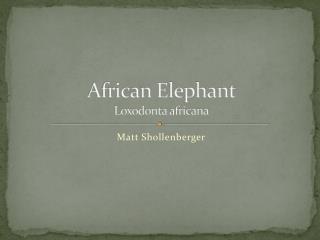 African Elephant Loxodonta africana. Matt Shollenberger. Description. African elephants are the largest land animals on Earth. They eat roots, grasses, fruit, and bark. An adult can consume 300 pounds of food a day. They are poached for their valuable ivory. Nearly 30% of tree

Culling Elephants - . marc di cola matt blakeslee. what is culling?. culling is the removing or killing of surplus

The Elephant who lost his patience A Gujarati Story by Yash Jagani - . lesson aims: to recognise and value differences

Elephant Toothpaste - . by: ashley morgan. purpose. the purpose of this lab was to mix two solutions together and form a

AFRICAN ELEPHANT - . african elephants are the largest land animal mammals in the world. colour: brownish-grey with

Mambo The Elephant! - . mambo was an elephant, a big elephant. he has a long trunk, two big ears, four strong legs, two

PRESENTATION ON THE NATURAL HISTORY OF THE AFRICAN ELEPHANT - . classification of african elephant. kingdom : animalia

Order Proboscidea: the Elephants - . one living family, two living genera, 2 living species. for most of our

When Elephant Was King - . the story – fair &amp; just – a trusted leader. master of survival. benefactor of