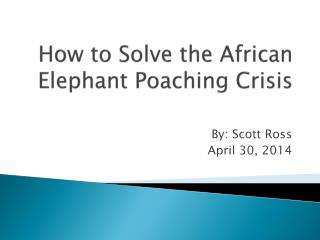 How to Solve the African Elephant Poaching Crisis How to Solve the African Elephant Poaching Crisis. By: Scott Ross April 30, 2014. Background: African Elephants. Vulnerable Species (VU) on the International Union for Conservation of Nature (IUCN) Red List: A species considered to be facing a high risk of extinction in the wild

How to Solve the African Elephant Poaching Crisis

POACHING - . by , ashley o’neill and quinn brunet. what is poaching?. poaching is hunting out of season or with out a

Environmental Threats - . ecosystems in crisis…tourism in crisis. threats. brainstorm a list of natural and human

Poaching - . by jamie and dylan. what is poaching?. poaching is killing animals out of season, capturing endangered

Exposing the Ivory Tower - Hispanic challenge for equity behind the podium. american association of hispanics in higher

Poaching - . amanda lovett . what is poaching?. illegally hunt or catch ( game or fish) on land that is not one's own or

Poaching - . by mason mangelson and zack rosquist. problems with poaching . poaching makes it so there are less deer in

Poaching - . poaching is one of the main threats to survival of amur tiger and other rare and endangered species of

CONSERVATION OF WILD LIFE - . introduction. wildlife refers to all non-cultivated and non-domesticated life .