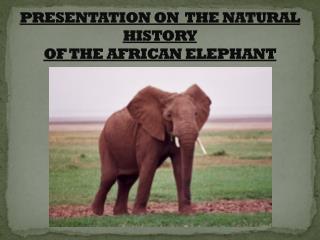 PRESENTATION ON THE NATURAL HISTORY OF THE AFRICAN ELEPHANT PRESENTATION ON THE NATURAL HISTORY OF THE AFRICAN ELEPHANT

Culling Elephants - . marc di cola matt blakeslee. what is culling?. culling is the removing or killing of surplus

The elephant who turned into an elephant shrew - . page 1. one day three e lephants a mamma a papa and a kid named elie

Elephants in the Room: Confronting Barriers to True Education - . anthony muhammad, phd. call to arms. “when a school

Overview of natural history - . breakdown of time. different periods of earth’s history are broken into sets of time

Order Proboscidea: the Elephants - . one living family, two living genera, 2 living species. for most of our