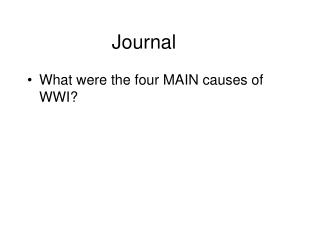 Journal . What were the four MAIN causes of WWI?. On a clean page: SWABAT!. Identify the countries that fought for the Central Powers and the Allied Powers in WWI Define “total war”. Explain how World War One was a total war. Define “war of attrition”. Journal Prompts - . journal rules. write three quarters of a page (or a half page if you have big paper) practice

Journal - . at the end of the first chapter, paul says, “youth! we are none of us more than twenty years old. but

ENVM 7015 a) Importance of peer-reviewed journal articles b) Application of statistics in research - . types of journal

Journal Club - How to use and article about a diagnostic test satyen gada, md lt mc (fs) usn ncc pediatric

How to review a paper for a journal - . dr stephanie dancer editor journal of hospital infection. what is peer

Intrapersonal Interventions - . ways to lower your stress level without need to involve others. eliminate as many

Argument - . lesson 1: everything’s an argument. in your journal:. respond to this prompt as your next journal entry:

Journal of the Day - . why is it important to know who is in your country? (8 sent). population &amp; urbanization.