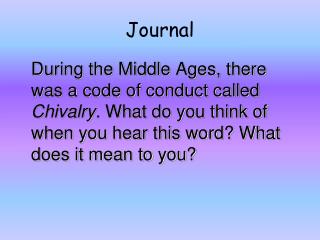 Journal. During the Middle Ages, there was a code of conduct called Chivalry. What do you think of when you hear this word? What does it mean to you?. The Early Middle Ages: The Franks & Feudalism. Or..were the Dark Ages really a dark as they seemed?. Who sacked the city of Rome?.