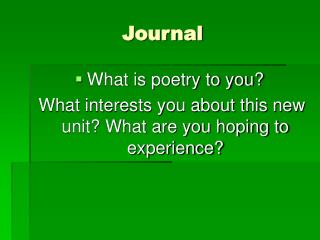 Journal. What is poetry to you? What interests you about this new unit? What are you hoping to experience?. Poetry. Type of rhythmic language that uses figures of speech and imagery to appeal to the reader's emotions and imagination. . Stanza. A paragraph in poetry