What is a compass? - PowerPoint PPT Presentation 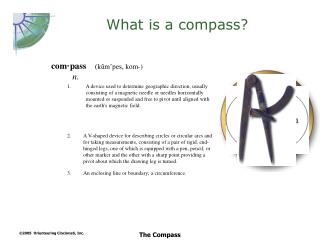 What is a compass? What is a compass?. com·pass (kŭm’pes, kom-) n. A device used to determine geographic direction, usually consisting of a magnetic needle or needles horizontally mounted or suspended and free to pivot until aligned with the earth's magnetic field.

What is a compass?

More Than You’ll Ever Know - . to the sick he is the healer and to the lost a compass for your way to the lonely he is

Studies - . ahead cosmos and compass. the ahead study. r. ahead: study design. six-month, double-blind, double-dummy. 2

Introduction to the Brunton Compass - . parts of the compass uses of the brunton compass - bearing - strike and dip -