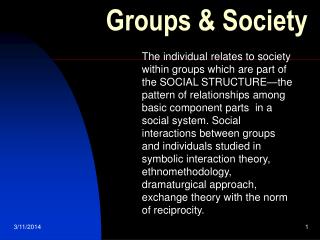 Language and society - . 1. the scope of sociolinguistics 1.1 indications of relatedness between language and

Ch. 8 Differences Among Groups - How statistics test differences among groups do the two levels of treatment differ

Chapter 10- Interest Groups - . (1). define what an interest group is, and contrast its functions with political parties

The impact of Religion on U.S. Politics and Society - . a society permeated by a religious ethic of all influences.