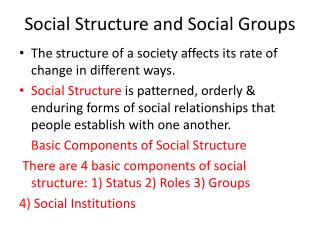 Social Structure and Social Groups. The structure of a society affects its rate of change in different ways. Social Structure is patterned, orderly & enduring forms of social relationships that people establish with one another. Basic Components of Social Structure

Social and Political Philosophy: What is the Best Society? - . states and societies. humans are social creatures: we like

Social structure is expressed through social interaction - . * stable pattern of relationships * in place before we come

Social Structure - . building blocks of social structure. what guides our interaction. society as a structure status

How does your media product represent particular social groups? - . by lucy-anne richardson. my front cover represents

Social Structure &amp; Society - . essential questions. 1. how do societies change over time? 2. what are the