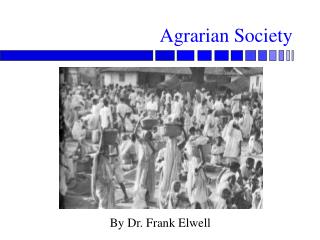 Southern Agrarian Society - . teach the development of the southern agrarian society from 1800 to 1850 annie decker and

The Agrarian Revolt - From stalemate to crisis. the agrarian revolt. the grangers. the first major effort to organize

The Agrarian Republic - . chapter 9: out of many. today’s learning targets. #2: outline the communities on the pacific

The Agrarian Revolution - . modernization~ (noun) the transformation from a traditional farming society to a city and

Agrarian and Industrial Revolution - . agrarian revolution. enclosure system the process of taking over and fencing off