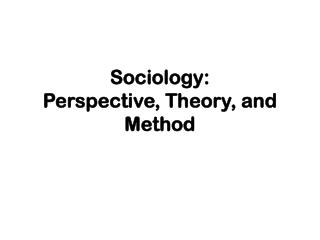 INTRODUCTION TO SOCIOLOGY - . understand important sociological terminology. what is sociology?. on your tables create a

Finding Eigenvalues and Eigenvectors - . what is really important?. approaches. find the characteristic polynomial

What is Robust Design or Taguchi’s method? - . an experimental method to achieve product and process quality through