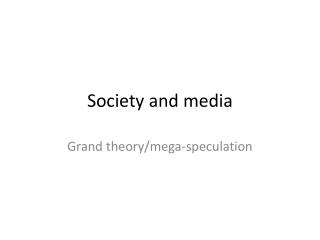 Society and media. Grand theory/mega-speculation. Grand questions. What is the nature of society? How do societies come into existence? How do they evolve? What brings about change, expansion/success and/or contraction/failure? The Media, Technology and Society - . the purpose: to familiarize you with the subtle and overt influence (manipulation)

Theory of media and society - . varying perspectives of media theory. progressive versus conservative progressive or

Media and Changing Society: Dilemmas & Challenges - The term fake news is in itself is a provocative one but when we

Theories of Media, culture and Society - . mcluhan. he focused on popular electronic media. it was the time when

Media &amp; Society I - . agenda setting theory and news production research. news is created and packaged in a

New Media and Society Scott Abel, Baltic Film and Media School - . a run-through of a bfm course created under the

Media, Society and Models: Good or Bad Influence? - . savannah sappington dr. moschetta. question. what do you think of

What is the relationship between media and society? - . kelsey foley. overview. the effect society has on media the